Here you can find a strain description about Santa Maria F8 and also some user-based reviews and infos directly from the SeedFinder (if available). You can also find the offers and auctions here if Santa Maria F8 cannabis seeds are on stock at MyCannapot right now. 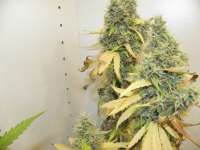 SeedFinder Info about the strain Santa Maria from No Mercy Supply:

Santa Maria is a variety of marijuana stemming from the Brazilian Amazon where it has been used in a spiritual context. While Santa Maria is not being used for spiritual purposes in the Netherlands, out of respect for the plant it`s name has been changed to Planck.
The distribution in Holland of the real Santa Maria clones was done by the former Highlife-magazine chief editor, Bernt Gundersen, because he was bringing his new `found` clones of a strain that is worldwide known by now... to No Mercy Supply... to Cees.
And you better be sure.... he took care of free distribution (50% of the Coffeeshops in Holland have the name Santa Maria on their price-list).
No strain in the world so famous... Santa Maria. Strange effect... no seeds available, this plant was cloned for at least 15 years, and nobody knows the genetic background.

Because this is originally an outdoor plant, Planck should be cut vertically. If you don`t do that, the plant continues to grow and eventually perishes under the weight of it`s own buds, which cannot be supported by the skinny stalk. By cutting vertically they grow rather widespread; therefore put only nine plants on a square meter and twelve on a square meter of rockwool. Planck doesn't need a prolonged growing phase; on rockwool no more than three days, on soil five at most.

Flowering time is between eight and nine weeks, which is modest for a plant that is 2/3 Sativa and 1/3 Indica. The plant has few leaves which makes trimming and cleaning easy. It`s potency resembles that of a Shiva, while the white layer on the leaves might be expected with an Indica. On the other hand, the effect is so high and releases so much energy, that actually it could not be compared to any of those. The taste is full of flowers and fruits, while the high seems to last forever.

Something about the yield. Being a topplant, quality is the main issue here. On the other hand, the yield, which should be somewhere between that of a White Widow and a Special, remains highly surprising.

No Mercy about the Santa-Maria F8 (actual version):
After having crossed a Santa Maria with a Mexican Haze and a Silver Pearl and inbreeding the resulting plant for 4 generations, one male was selected to pollinate a pure Santa Maria mother. After this we inbred 8 times by backcrossing a male/son with the mother (a pure Santa Maria). Scientifically spoken an F6 should be pure, but according to our experience cannabis plants become truly pure only in F8. In other words: this Santa Maria is pure. A good and fast “white” plant for both indoor and outdoor. Santa Maria’s have proven themselves over and over again for the last 15-17 years. This exotic variety has very powerful erotic effects.

1 user reviews about this strain

Click here for more info, parents, hybrids, genetic tree, all reviews and much more about this strain and its phenotypes!

Santa Maria F8 is not available at our shop at the moment!