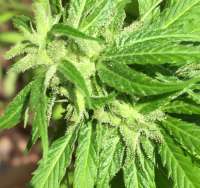 Arjans Haze #1 was a first place winner of the 2004 High Times People Cannabis Cup. It's a must for all connoisseurs and breeders, and is a very special plant that has a lot of fine qualities.

Flowering Time: Indoors: 11 weeks / Outdoors: In the Northern emisphere will finish in from mid-October to late November. In the Southern emisphere in May.
Yield (Indoors): 350 to 450 gr/sqm

8 user reviews about this strain

The aroma / smell of this variety recalls onto / is

The taste / flavour of this variety recalls onto / is

Emeraldo Here my Arjan's Haze #1 grow notes made over the growing season. For anyone interested in this strain, I kept a grow journal "Arjan's Haze #1" on 420 magazine, see also photos from my grow:

May 17: Germinated two seeds May 17 at 47N. Both seeds popped. One seedling had assymetrical "crinkly" leaves at first. The other had symmetrical leaves and a skunky smell. Only the symmetrical pheno was grown to harvest.

June 19: The symmetrical pheno is now only 4 weeks old but gives of a fairly strong aroma, maybe that's the G-13 expressing itself... About the end of June, the skunky aroma of the seedling vanished as the plant went into full veg mode.

September 1: Arjan's Haze #1 would have gotten very tall if I had not topped her twice. Even so, she is pushing against the greenhouse ceiling. Lanky and loose, she has large fan leaves and her long colas needed support. At this point in time, she has not started flowering visibly yet, although all other strains in my grow were pushing pistils.

October 1: At this point, Arjan's Haze #1 still shows no white pistils. Rather, and surprizingly for me, an inexperienced haze grower, AH#1 pushed tender green tendrils on the tips of the bud sites. These green tendrils look a bit like pistils, but not what I expected. I was not familiar with how this haze strain flowers.

November 1: Arjan's Haze #1 has been pushing fat white pistils for some time now. Skunky aroma is back. Temperatures have dropped, but she seems to be handling that well. I suspect she'll need a few more weeks. The summary page here on seedfinder says she ought to be ready in mid-October, but here it is early November and she still has a long way to go. Will go as long as needed, Nov 21 latest.

November 15: Arjan's Haze #1's buds are getting sugary and the pistils are turning brown, though new white and clear pistils continue to emerge. May let her go to Nov 25 if needed. Aroma is getting nice, sweet and moss. Greenhouse is now heated to 68 F, though outside nighttime temps are freezing she is holding up and continuing to ripen.

November 21: Harvest. Abundant trichomes on main branches were mostly milky-cloudy, with hints of amber here and there. Aroma of pine with a touch of melon. Effect is a very strong, long lasting head high with little body buzz.

For me there was a learning curve associated with growing Arjan's Haze #1: Late and long flowering, first shown by green tendrils （not white pistils） forming in late September and around October 1. By November 1, thick fat whitish pistils had begun to form, but still looked unusual to me. By about November 15, ripening accelerated quickly. Harvested on November 21.

Haze growers learn to be patient.This was my first time growing "haze" strains, and the grow included Arjan's Haze #1. The AH#1 got huge and lanky, had incredibly long fan leaves and a deep green color.Her branches needed support in late flowering as you can see in my photos. She was later to flower than, say, Arjan's Strawberry Haze （which started flowering around August 20）.Arjan's Haze #1 did not visibly flower until around October 1, so at some point I wondered when and how she would flower.Clearly, she just needed more time than other strains I've grown.Patience is required, but given time she finished.The pistils and resin accelerated towards finishing.She was harvested on November 21.The head high is strong and long lasting, blasting.

Not secret pedigree anymore but, who knows?

Click here for more info, parents, hybrids, genetic tree, all reviews and much more about this strain and its phenotypes!

There are no actual offers at the shop right now, but check out the auctions below!